There are multiple resources talking about how the altered scale is related to superlocrian, which is also the 7th mode of the melodic minor scale. Unless you have a major in music theory, all this information is overly confusing, leading you to think that playing in the style of Robben Ford is very difficult.

That is why we will approach this topic from a down-to-earth approach. To do so, we will start to look at how guitarists, and musicians in general, approach the topic of advanced blues and jazz guitar soloing. The great thing about blues soloing is that we can add specific scales that sound very tense, jazzy, etc. at specific times in a chord progression. Think about those guitarists like Scott Henderson (you might want to look this one up if you don’t know him yet) who make their audience turn their head with a sudden frenzy of notes that sound totally ‘out there’.

To understand how these guitarists use scales like the altered scale it is important that you have a basic understanding of how chord tones and scales relate. Basically, a scale exists out of two types of notes:

The bold notes in the scale above are the extension notes, since they are not part of the chord, but they are part of the scale. In music theory these notes are often referred to as dissonant pitches (level 1). So to recap we are having these pitches:

1. chord tones = notes that appear in the scale AND also in the chord (consonant pitches)

2. extensions/tension notes = notes that appear in the scale but NOT in the chord (dissonant pitches (level 1)).

Experienced guitarists target chord tones when they want to play safe, outline the chords they are playing over, or if they generally are looking for a more stable sound. On the other hand, they target tension notes if they want to add… well, tension.

How Altered Tones Can Give Your Solos That Twisted Heartfelt Feel

These tension notes have a more dissonant feel to it, but we can even take this one step further. To create even more tension, we can ‘alter’ the extension notes. In this way we are creating a third group of possible notes to use when soloing:

These altered tones gives the lick or passage in the solo a really tense, jazzy feel.

The altered tones consists out of:

Understanding the altered scale is not all that hard when you approach it from the dominant seventh chord. In the image below you see the chord diagram for the A7 chord: 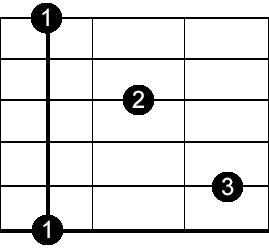 Now look at the following image, which features the same chord tones from the A7 chord, but now along with the altered notes.

Remember, these altered notes are really notes that aren’t easy to use over the dominant seventh chord they are being played over, but when we use it together with the chord tones they become very cool sounding jazz outbreaks out of the normal scales we could use. This all results into a very jazzy sound that is great to use when you want to build tension. Think of the altered tones as ‘outside notes’.

Take for instance this A7#5 chord:

This chord basically consists out of the A7 chord tones and also uses one altered tone; the F note in this case, which is the #5 in this example). This chord typically gets used when going from a chord that is a fifth lower than the previous chord. For instance, in a regular 12 bar blues progression this can happen at different points:

As you can see above, an altered chord is sometimes referred to as ‘alt’ instead of writing the full chord name. This is because, as you learned above, we can use both the b5, #5, b9 and #9 to alter a chord, the choice is yours. For now, we can use the A7#5 chord and the E7#9 chord at these places to make it more defined, as in the progression below.

Listen to the audio example of this Altered Scale Lick.

If you want to learn how to play licks that best outline the chords you are playing over a blues (great guitarists do this all of the time) I recommend to study my How Great Blues Guitarists ‘Spell Out’ Changes When Playing Over Blues Chords.

Get started today with my Best Lesson On Blues Guitar Solos