Remember when you first learned the minor pentatonic scale. You discovered how to improvise on guitar and before you knew it you were playing your own blues guitar licks. As much fun as learning to improvise on guitar in this way is, it’s important that you don’t get stuck in this phase where you are only using the minor pentatonic scale in your soloing. If you improvise using a 12 bar blues progression there are plenty of other options that you can choose from. In this article we are going to look at some of these so you can expand your options when you are playing blues solos.

The Basics: The Minor Pentatonic Scale

Using the minor pentatonic scale to improvise over blues chords is the approach that almost every beginner blues guitar student learns. Yet this approach is only one of the many possible ways we can use and if overused it may appear to the listener that you play the same solo in every song.

You can try this out for yourself; play these two notes simultaneously on guitar and notice the dissonance between these two notes. It’s true that the minor pentatonic is the first scale that you’ll learn in blues improvising, but this doesn’t mean that we have to stay stuck only using this scale.

How Professional Blues Guitarists Use The Minor Pentatonic Scale

Let’s look at how professional blues guitarists make use of the minor pentatonic scale to create advanced licks they use in their soloing. It’s a given fact that some guitarists like the dissonance that is cause by playing the C note against the C# note that is in the A7 chord. Still most experienced guitarists will choose to either:

It’s important that you understand that it’s perfectly legitimate to use the minor pentatonic scale to play over dominant blues chords. It’s just that there are many options that can be explored instead of using only the minor pentatonic scale in your soloing. Having the option to use more advanced scales leads to greater melodic freedom and is a great thing to have in general.

There are so many other scales that can be used in blues guitar soloing that it would be a pitty to only make use of the same scale all of the time. Advanced guitarists don’t use one single scale to play blues solos, but use a combination of many different scales, which makes their sound more advanced and highly personal. So

So let’s look at how you can become more creative with different scales and licks to radically improve your overall blues guitar soloing.

Alternating Between The Major And Minor Pentatonic Scale 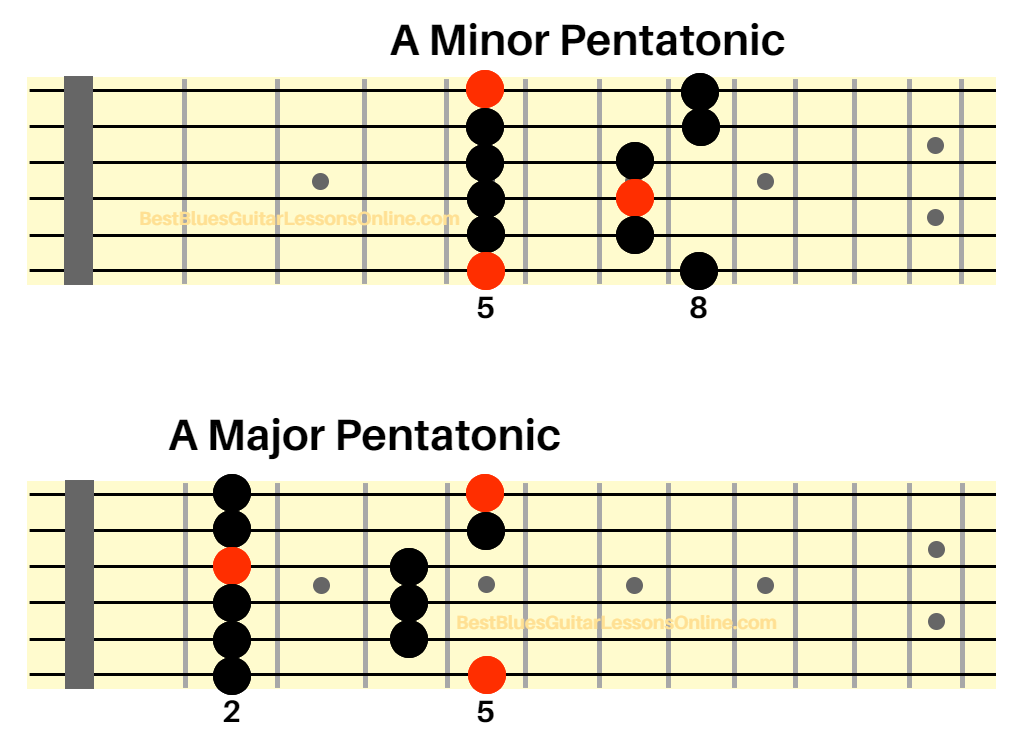 Now try this: play a solo over a blues in A backing track en switch back and forth between these two scales. You will notice that even though this sometimes will result in a nice sound, sometimes it will be challenging to create a fluent change between both scales. The change from the minor pentatonic to the major pentatonic scale (and vice versa) will often sound to ‘abrupt’. That’s why we’re going to look at some transitions in which you can combine these two scales.

Creating A Fluent Transition Between The Major And Minor Pentatonic Scale

Start to experiment with these approaches in your own guitar playing. You will notice that this way of playing will prove a radical shift in your sound and will spark your creativity. Learning blues guitar licks like the one above and applying them when you're improvising over backing tracks will make your soloing more advanced.

There are many more possibilities that you can learn to expand your options when soloing in the blues:

You can learn all of these approaches with advanced blues licks to practice in the free Blues Guitar Solo Guide On How To Play More Advanced Guitar Solos.