Strat Or Tele For Blues? What Is The Best Guitar For Blues?

Find Out Why The Wrong Guitar Kills Your Blues Playing

Many people are not aware of the differences between the stratocaster and the telecaster guitars, which leads to the possibility that your playing sounds completely out of tune while performing certain techniques. You might think that it is the guitar player's technical execution, but nothing could be further away from the truth as it is your own guitar that kills your guitar playing.

Before you put down a lot of money for a guitar that does not remain in tune during your playing style, it is best to read through this article so that you clearly know what the ideal model is for you.

The Main Difference Between A Stratocaster And Telecaster

Before we can look at the pros and cons of both the Stratocaster and Telecaster, it’s a must to look at the way both guitars are built as their building nuances will determine the biggest difference in sound and use.

When talking about these different guitar bridges a few words of explanation are appropriate here.

‘The bridge’ in guitar slang basically refers to the element on the body of the guitar that holds the strings in place. Throughout the years there has been many models on the market but there are in general two main differences: the ‘fixed bridge’ and the ‘floating bridge’.

Roughly spoken, the fixed bridge will leave you with a tighter sound as the floating bridge gives more of a wobbly sound due to their distinct bridges. In the video that accompanies this article, I demonstrate both strat and tele so you will have a clear example on their sound.

But when the Telecaster vs Stratocaster debate pops up, you need to look further than their tonality.

As I stated in the introduction of this article, there aren’t many people aware of the fact that the differences in how these guitars are constructed can have a dramatic impact on the intonation of your guitar playing.

Check out this well used blues lick (also used a lot in country guitar playing), that is being played in the C major pentatonic scale: 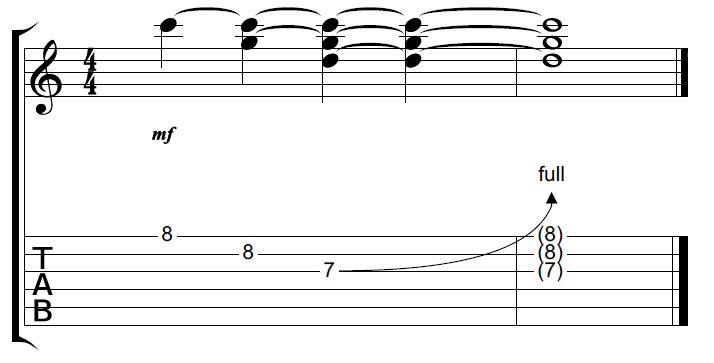 The lick above combines normal played notes together with a bent note. Playing this kind of lick with a floating bridge won’t really work out that well, because as soon as you execute the string bend, the normal played notes will sound out of tune (I demonstrate this phenomenon in the video above). The benefit of making bends easier to handle with a floating bridge goes out of the window here as it leaves you sounding out of tune while performing such bends. When your playing style includes a lot of these licks, where notes and bends are played at the same time, then the telecaster will be the preferable instrument for you. This gives way to the reason why many country guitarists prefer the telecaster guitar, as the example lick from above is a commonly played country guitar cliché. Of course there are many other similar licks to be found in the country guitar styles, where one string is bend up and other strings are played normally at the same time.

In order to cope with the intonation problem that the stratocaster guitar has when bending strings such as with the demonstrated string bends from the video, some guitarists keep the floating bridge from floating by putting a piece of wood between the bridge and the body of the guitar on the backside of the guitar.

As a final word on the topic of skills vs gear I would say this; how sound leaves your amplifier always starts with the way you play the instrument. Gear is always second place. Nevertheless that gear, as proven in this article, can drastically influence the end result of your sound as well.

Now that you know how to avoid this intonation problem, it’s time to further take control over your sound and guitar playing skills. In this free blues rhythm eBook you will learn how you can develop professional blues rhythm skills in order to match the sound of the blues masters.

Learn how you can break out of your guitar soloing cage that is holding your guitar playing progress hostage with this Essential Guitar Soloing Lesson.