How To Solo Over The Entire Guitar Neck Without Looking


"How on earth can he play these long licks all over the guitar neck without even looking???"


I remember studying guitarists like Joe Bonamassa and Eric Johnson and questioning how they played pentatonic licks over the entire guitar neck without the need of looking down at their guitar: 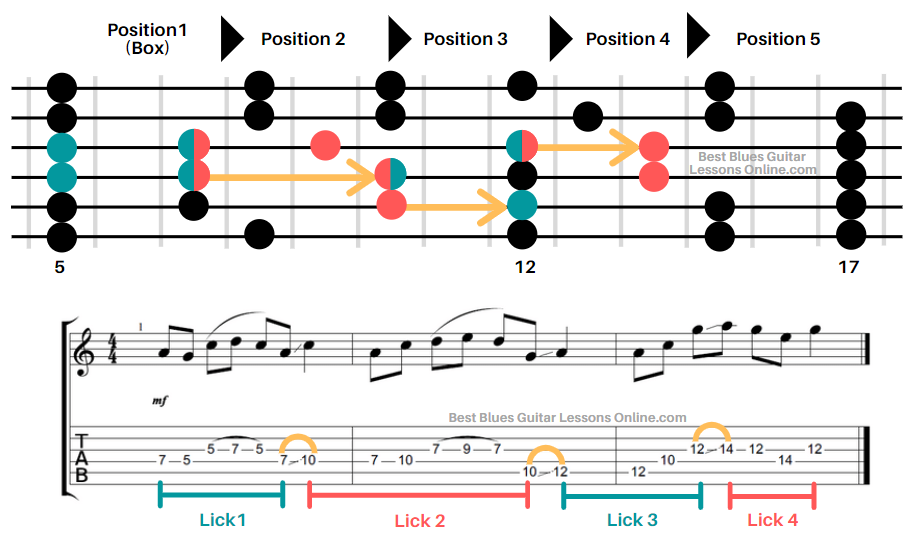 When I wanted to try their licks myself, I always managed to get close, but as soon as I stopped looking at the guitar it went wrong.

Then came the moment someone pointed out to me that the best guitarists practiced in a way that made it possible for them to 'let go of the guitar neck'.

In trying to become a better guitarist, there are many things that can slow your progress down and one of these things is tied to this exact thing!

If you aren't aware of how to precisely get over this fundamental hurdle in your playing, chances are you are creating lots of problems for yourself in multiple areas (guitar technique, fretboard freedom, etc.).

The solution is simple, but many people get this crucial part of the puzzle wrong.

If I would blindfold you right now, would you still be able to play your guitar on the same level?


Taking the right steps to play guitar without the help of sight is something many aspiring guitarist overlook.

A big part of the solution in advancing your guitar playing to the level of these great blues guitarists is to be able to play guitar by touch, or in other words without having to look at your guitar or your hands. 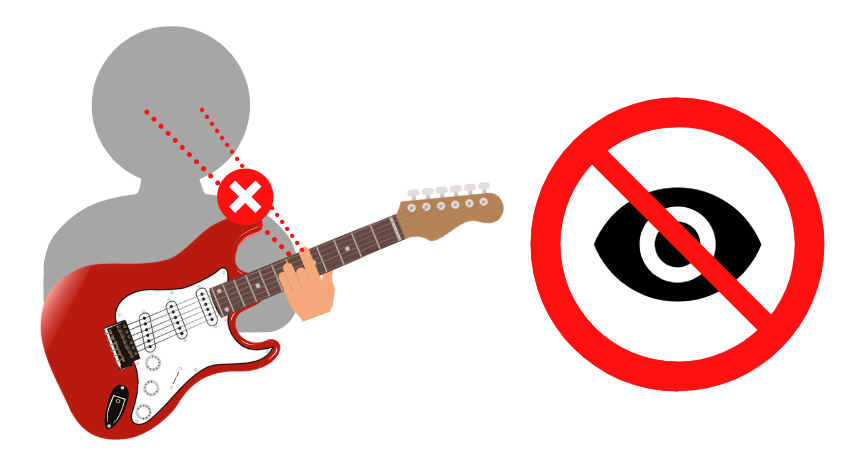 This article will guide you through all aspects to solo perfectly without the need of having to take a look at the guitar neck.


How you visualize and memorize the guitar neck are very important components that will determine with how much ease you will solo over the entire guitar neck without the demand of looking down at the frets of your instrument:

A first crucial point is to visualize and learn your scales horizontally on the guitar neck. This will become the key to breaking out of your scale positions and moving freely across the entire guitar neck.

Below you can see the five notes from the minor pentatonic scale placed horizontally on the fretboard:

Once you have acquired the knowledge about placing your scales in a horizontal fashion, it is time to go one step further so that you can become competent in playing it blindly.

Take a look at the following diagram:

If we simply determine how the notes of the minor pentatonic scale are connected on a single string, we can reduce it to one simple formula: 32322. The beauty of this formula is that we use this over and over again on the entire guitar neck.

In the example above, we started with the C note, which is an interval of a fifth in the F-minor key. However, this will not always be the case as we are free to start from any random note of the scale. It is a matter of knowing where you start in the pattern. For example, take the Eb note as the starting point, than the pattern becomes: 2322 -32322 - 32322 - and so on.

The key here is to play the notes of the minor pentatonic scale on one string and, as you do so, watch how this formula unfold itself.


This first method as just discussed is of great value, but not suitable for everyone. Some people prefer thinking in formulas, others prefer a more visual system. If you belong to the second category, the method we are going to talk about right now will probably be a better way of thinking for you.

Method 2, however, expects from you to know all five positions of the minor pentatonic scale. The way of thinking here is as follows: visualise the scale positions (the boxes) that enclose the pattern on one string. By doing so, you’ll get in the end the same results as the previous first method.


Just as we cannot continuously play in a single scale position, we cannot continue to solo on a single string. Sooner or later we'll have to break out of both situations or we’ll never be able to discover every corner of the guitar neck when improvising a guitar solo.

Therefore we’ll go over the method of how to tie your blues licks together in a fluent way. Suppose you play a lick in the first position of the minor pentatonic scale, than the note on which you end the lick will become the starting point to slide into the next scale position.

I’ll demonstrate everything in more detail in the added video, so I strongly suggest to watch the videos along with this article.

While playing these licks it is important that you don’t look at your instrument but instead try to feel the frets. How far do your fingers need to move to get to the next notes?

The knowledge provided by these three methods are the key in overcoming the false sense of security offered by your sight. You will be able to control your movements blindly and that means doors will start to open as you will be able to really feel the guitar, the movements, the music.


Chances are, if you ignore this part of the article, you will eventually make mistakes when soloing only by touch. Because there is an exception where you’d better look down at your fingers.

When you have to make a big jump over a lot of frets, make sure to look at the fret you will end up with.

A good example of where it can go wrong is the solo of "The Man Who Sold The World" during Nirvana's MTV Unplugged concert. To start the solo, Kurt Cobain has to make a big jump over about ten frets. However, he misses the target note twice!

If you do you miss the intended note, do not panic, by simply using a small slide towards the "correct" note you hide the mistake and nobody will notice.


There are multiple reasons why you need to able to play guitar without looking at the actual instrument.

First of all it’s one of the most important skills when we are talking about performing live as it allows you to truly connect with an audience during a live show.

On the other hand is learning to play blindly hugely important when you need to be switching keys in a split second.

This article is the ultimate guide in learning to play blues solos over the entire fretboard without the help of sight.

In fact, it would be a huge shame to limit ourselves to only stay inside the minor pentatonic. In my free eBook, I provide you with the tips and tricks to play more advance blues solos.