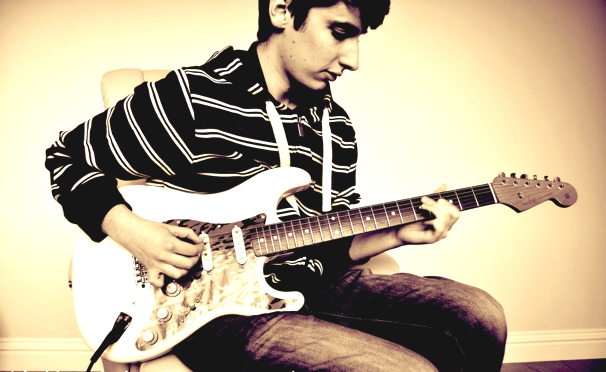 As the godfathers of the blues like Stevie Ray Vaughan, BB King, Albert King, etc. will continue to inspire for decades to come, a whole new generation of guitarists is ready to pass the torch. One of these up-and-coming guitarists is Chris King Robinson, only 18-year-old but ready to play along the greats. Joe Bonamassa recently liked a youtube video of him, which describes the level of guitar playing of this young rising star. In this interview Chris talks about which traps to avoid in your blues guitar playing and talks about how he developed his own guitar playing.

Antony Reynaert: What did you find the most challenging about learning the guitar?

Chris King Robinson: I suppose syncing up both my left hand and right hand to the same ability is always a struggle for anyone starting, my left hand is still way more developed.

AR: What advice would you give to beginner blues guitarists?
CKR: Focus on phrasing and moving people emotionally rather than trying to play fast.

AR: How long would you recommend practicing?
CKR: I try not to time it. I used to play for hours a day at one point but don’t have that sort of time anymore.

AR: Do you ever feel you are playing the same stuff over and over?
CKR: I suppose it gets that way sometimes, but even if you listen to legendary guitarists like Albert King, you always hear the same few licks but that’s cool since the licks are awesome, ha-ha.

AR: Did you ever take guitar lessons or are you self-taught?
CKR: I am self-taught and have never had lessons, although I did use YouTube for certain tutorials along the way.

AR: How do you advise that guitarists practice combining licks and riffs with chords in their blues improvisations?
CKR: I would suggest playing along to backing tracks as much as possible and playing a mixture of chords and licks over them, after a while it will become second nature.

AR: How important is learning blues music theory in improving your playing ability? What about scales, modes, etc.?
CKR: I personally don’t know any theory, and I can do what I hear in my head fine with no problems. Though you could ask another guitarist the same question and they would give the complete opposite answer.

AR: Do you make a determined effort to memorize certain licks or does it just come naturally through years of playing and improvisation?
CKR: At the start I did, I learned every Stevie Ray Vaughan lick I could. But after a while I learned so many licks from different people that they came out naturally in my playing and now I can form my own licks, which are essentially variations of licks I once learned. People are now starting to say I learned a Chris King Robinson lick, which is the best feeling.

AR: Could you elaborate on which "traps" to avoid absolutely in your guitar playing progress for guitar students?
CKR: The number one trap to try and avoid is the “Gear trap”. Every guitarist goes down the route of thinking that new pedal will make them sound better; I’ve done it about 30 times now and still haven’t learned. I think that of course it helps to have nice gear but it’s more beneficial to spend your time practicing as opposed to reading about gear online.
What are according to you the best examples (for the beginning guitarist until the advanced level guitarist) of blues players to study and exactly WHY are they YOUR best examples?

CKR: I think that Stevie Ray Vaughan, Jimi Hendrix, Buddy Guy, Eric Clapton, Robert Cray, Albert Collins, Albert King etc, are the best examples you can study as there is so much variety between all of their playing from bending technique, tone, vibrato, phrasing etc.

Learn how to play blues rhythm guitar like the Blues Masters.