AC/DC Guitar Solo Analysis: What Angus Young Has Learned From The Blues

Many great rock guitarists like Angus Young of AC/DC have learned to play the guitar by looking at famous blues players from their time. In the late 60’s and early 70’s there weren’t that much rock bands around, most of the famous rock bands we know only started around that time or even later, so there wasn’t that much music to learn from. With this little information, some developed their own style that started to evolve from the many blues licks and songs they learned when they were young. In this article we are going to focus on some famous licks, and look at exactly how they are related to the early blues guitar players.

How Blues Works As The Gateway To Many Other Styles

Angus Young’s energetic guitar style is heavily influenced by famous rock ‘n roll and blues artists. His lead playing consists out of very straight blues guitar playing in both the major and minor pentatonic blues scale, while combining these two scales in a very melodic manner. Sometimes you can even spot touches of Scottish folk in his guitar solos. He didn’t learn that much from rock bands while he was young, because at that time the music scene consisted mostly out of blues and rock ‘n roll bands. His playing also never contained the today’s popular fancy playing like shredding and mindless blasts of fast notes, because he felt that playing blues guitar licks – in a good way – was far more effective.

So it can be stated that being good at blues guitar playing is a gateway to many other styles of playing! Having a good list of blues guitar licks you can always get back to when you’re playing rock music is essential. Many common blues licks and phrases are often described as ‘cliché licks’, because the most famous bands in history heavily relied on these licks and phrases.

In great lines, this approach together with accurate timing and energetic vibrato’s make the sound of Angus Young. So let’s look at some of the stepping-stones in Angus Young’s guitar playing. If you have difficulty performing the presented exercises, check out my free Blues Guitar Technique guide.

Here’s an example of a very common used lick, located in the first position of the pentatonic scale. The lick was also used a lot by Jimi Hendrix, heard on solos of songs like ‘Voodoo Child’ and ‘Who Knows’. Angus used the lick in all variations of timings, with moving the first beat accent on different notes of the lick. A great version with many variations of this lick can be heard in the ending solo of the song “Whole Lotta Rosie”.

The lick starts off with a full bending on the G string 7th fret, and while holding the bend, the same note on the 5th fret B string is played and then pulled off from the 8th fret to start it all over again. The bend on the G string 7th fret can be also played a bit loosely, a half step bend to the blue note would also sound right! You also can try to play the lick with the first beat on the pull-off note for example, and so create a different feeling with the same lick. The key to Angus’ soloing is to get the most out of the least notes, and in almost every song of the 70’s this lick is used. It’s common for him to start of the lick slower than the song’s beat, and slowly accelerate the lick to the correct timing. Be sure to experiment with it!

Another classic lick that’s commonly used by Angus is to bend and release the 7th fret both G and B string a half step. This creates a very bluesy feel! He also often plays notes from the major scale combined with the minor licks, which can sound very colorful. A great example of this is a hammer-on from the minor 3th to the major 3th note, in this case a hammer-on of the G string 5th fret to the 6th fret. 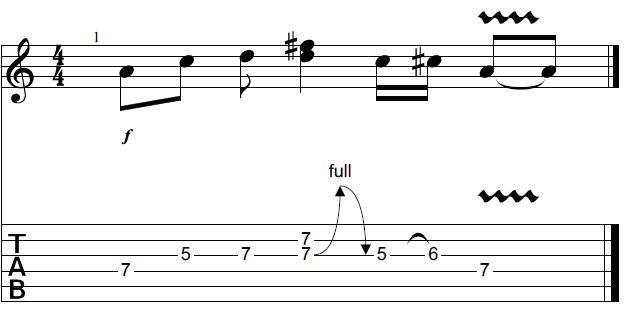 Angus Young was also influenced a lot by BB King’s soloing, as he excessively uses the 4th box major pentatonic position to get country and blues based licks. The root note of the box in A for example is located on the B string 10th fret. He also combines this major pentatonic scale with the minor pentatonic notes around this box, which makes it sound very bluesy.  Remember, most of the times Angus Young doesn’t play fancy thinks like exotic scales or difficult licks, but just good old blues licks played in a different context. Fact is that this formula worked for a lot of hard rock guitar players in the 70’s and 80’s! 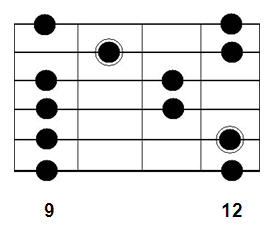 The next lick is a common blues lick played by Angus in the major box in the key of A (see scale diagram above). It starts off with a slide to the 11th fret on the G string, and then followed by a blues-country bend on the B string. While the bend is hold, the 12th fret E string is picked (use your pinky finger for this) and then the bend is released. This bend sounds very good when repeated, and can be heard a lot in Angus’ playing! 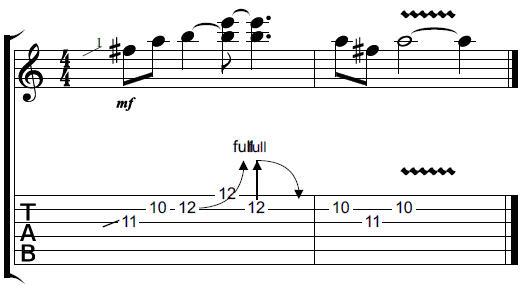 A good starting point to play great rock solos is to learn the 5 pentatonic box positions on the neck of the guitar (see the first image of this article), and get familiar with them. Then start to listen to various blues-rock players and try to copy their licks and riffs while playing them over a rock backing track.

Of course there are many other important steps in becoming a great blues / rock soloist. You can learn to transform your mediocre solos to highly unique and advanced guitar solos in these Guitar Solo Tips.