How To Play Blues On Acoustic Guitar

The Ultimate Guide In Getting Started With Acoustic Blues Guitar

Do you have a hard time coming up with 'something to play' on guitar for other people?

I found that learning to play acoustic blues guitar is the best solution to this widespread problem amongst aspiring guitarists.

Learning to play this style enables you to play complete songs in an entertaining way, without vocals or other instruments.

In this article we'll go over the basics of learning to play the blues on acoustic guitar.

The Backbone Of The Blues - The Standard 12 Bar Blues

A standard 12 bar blues is basically a chord progression with a fixed length of 12 bars.

The following diagram shows the sequence of chords played during a 12 bar blues in the key of E: 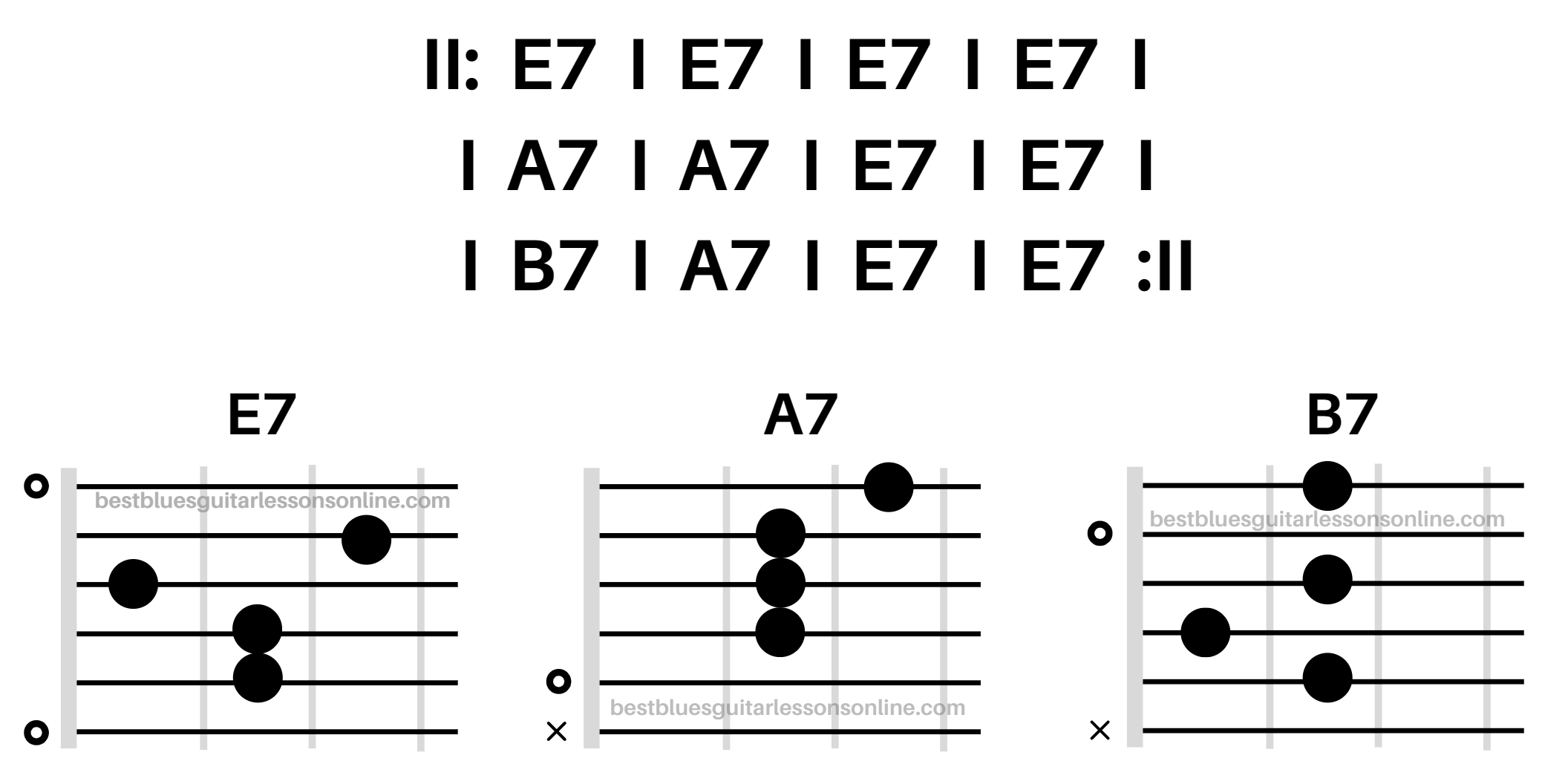 During this 12 bar blues, a specific sequence of chords is played for a total of 12 bars before being repeated again.

The art of acoustic blues resides in learning to make the 12 bar blues sound exciting.

The chords mentioned above are the most commonly used chords to play the progression. But playing the same three chords over and over turns pretty boring after a while. That's why we want to have additional options to play during the 12 bars.

One option is to vary our 12 bar blues by using other chord voicings. A voicing of a chord simply refers to the position of the notes within a chord. Below you see three different voicings of the same E7 chord. You'll always find the same notes in these chords but arranged differently each time.

The last chord from the above list is a moveable chord. By moving the same chord shape to another position higher on the neck, you form a voicing of the A7 and B7 chord:

Now try playing the standard 12 bar blues by alternating between these new chord voicings and the previously mentioned voicings.

I demonstrate this in the above video, so make sure to watch that video so you have a clear understanding of how this sounds.

The beautiful thing about acoustic blues is that the expansion of our 12 bar doesn't stop here.

In addition to playing the A7, E7 and B7 chords, we can also 'weave' blues licks in between the 12 measures.

The ultimate goal in playing acoustic blues is being able to improvise with different licks and chords while maintaining the structure of the 12 bars.

Acoustic blues is often played in the key of E on guitar because of the exceptional opportunities to use open strings. These open strings are the perfect tool to play great sounding blues parts.

Take for example this popular blues guitar lick that makes use of open strings:

This lick is arranged perfectly to fit into the measure of the A7 chord. In other words, whenever we play the A7 chord in our 12 bar blues we can replace it with the above lick.

The 10th bar of the progression is the most suitable position to use this lick. But of course this doesn't mean that it should stop you from experimenting with playing the lick during the other measures in which the A7 chord is played.

Everything we covered in this article is just the tip of the iceberg when it comes to playing exciting blues rhythm parts. If you analyse the parts from the masters of the blues, you come to the conclusion that these are far more complex than the average blues guitar riffs you find online.

That's why I recommend to download my free eBook on How To Play Blues Rhythm Guitar where you learn how the best blues guitarists improvise with chords, riffs and rhythms at the same time.

Tired Of Being Clueless What To Practice In Your Blues Guitar Playing?

Finally leave the trail and error behind by knowing exactly what to practice in my Online Blues Guitar Lessons.